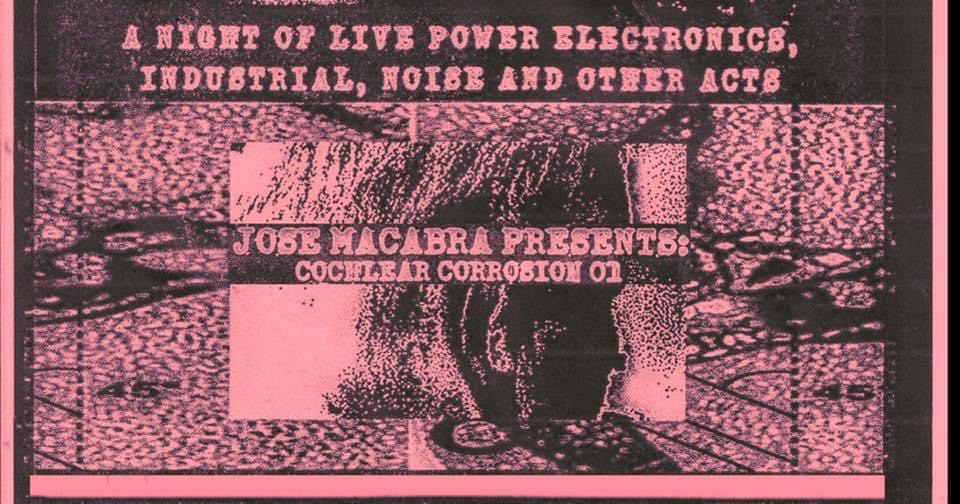 Posted at 13:10h in Events, Music by alistair

A night of Live Power Electronics, Industrial, Noise and Other Acts

* Am Not (featuring Hemann Kopp and other secret guests)

Unlike many repetitive, almost banal projects that exploit the area of power electronics, Am Not immediately draws the listener’s attention with its quality. The success of the project headed by Tamon Miyakita consists in the awareness of the medium, proper proportions, and accuracy – qualities which are quite rare in the sphere of radical power electronics. Am Not made its début in 2010 in London, under the wings of Unrest Productions, a label specializing in this genre. First Morbid Vibrations and Unpunished were an original offering that went beyond the mould that probably anyone who speaks the language of noise has to fight. Am Not is a skilfully composed, carefully dosed display of anger and ideological opposition. An inherent ingredient of the live act is video montages devoid of chance and nonsense. The result is a solid and shallow-free explosive audiovisual material. The output of Am Not can be situated close to projects such as Anenzephalia and Genocide Organ. Hermann Kopp himself appears on the last cassette, entitled Incursions.

ANTIchildLEAGUE (ACL) was born as an experimental DIY solo project in 1997 created by Gaya Donadio, evolving from a postpunk collision journey to a personalised whirl. Prior to 1997, Donadio was also involved in various music projects and collectives.

Gaya Donadio is also known for the promotion of underground music live events in London under the banner of Hinoeuma the Malediction/Level X/Confession, Hagshadow mail order and Six Comm & Schrage Music.

Jose Macabra is an inimitable artist. His presence at any event raises temperatures and provides a memorable experience.  Specialising in “teknoise”and “Electronic Ritual”, Jose’s sets rock a venue to its foundations, whilst always favouring audio innovation over safer territory. His alternative appearance and magnetic stage presence add to his appeal, but it’s his music that really sets Jose apart from other noise artists.

A Spanish native, Jose moved to London to study Sound Design at London College Of Communications. It was here he was introduced to the city’s vibrant electronic scene. As a result he’s played at countless underground parties, but his popularity has seen him take his sound “overground” across Europe, touching down in techno institutions. He’s had residencies at legendary parties and is held in high regard by promoters throughout the continent. He has been an integral part of the teams behind nights such as Behind Bars and Antagony.

Deviance is at the heart of everything Jose does. And “everything he does” turns out to be quite a lot. Jose is not only extremely talented but also something of a Renaissance man: as well as his storming club sets, he’s also a performance artist, sound designer, improvised noise creator, producer and a beguiling solo live act. It’s this interest in performance that’s seen Jose receive commissions for galleries, artist collaborations and more, with his work performed in art establishment venues including The Barbican, Tate Modern , BFI and The Photographer’s Gallery. Works involving Jose’s sound design have toured major festivals in Madrid, Berlin, Athens, Brussels, Milan, Barcelona and other cultural centres.

Collaboration is at the heart of Jose’s work, be it in a straight-forward club setting or a soundtrack commission for theatre, a body-piercing performance or high art concept work. “If you book me, it’s because you like what I do”, he asserts with confidence. “You tell me what to do, but I will do it my way”. Jose has worked with Ernesto Tomasini, Ron Athey, HR. Giger, Sally Mann, Empress Stah, Lydia Lunch, FFIN DANCE Company, UCL, Unite The Union,  Katerina Valstur and many more, but it’s with Sammie Joplin that he’s found his longest-standing collaborative partner. Performing as Brood, the due have been known to challenge audience’s preconceptions with drone sets that sometimes last for hours on end.

Seemingly a mix of contradictions, this fierce, larger-than-life persona betrays a quiet, sensitive soul underneath. His early interest in the Catholic church prompted a lifelong understanding of the power of ritual that has carried over into his music. Jose’s father’s attempts to keep his son from this lifestyle proved flawed; “he told me that if you go to a Catholic school, you will become a priest or a homo. I wanted to be both!” Ultimately, the sense of danger and unpredictability Jose brings to performance is all part of the act. “Everyone’s life is a performance”, muses Jose. “The only thing that isn’t a performance is death.”

IlSantoBevitore is Nicola’s main stage name and solo project. He performed across Europe in countries including Italy, Spain, Germany and England.

“The variety of instruments and their diverse sources create an exceptional depth of space, into which the listener is alluringly grabbed into at first, to be then dragged dead later ahead.” The Quietus

“… the tape reflects on Serra’s home country, and the jumps between beauty and harshness draw an outline of uneasy interactions. In effect, it becomes a Proustian nightmare, as if Serra’s reflections on home are triggering a deluge of violently juxtaposed memories.” The Quietus

“Like a soundtrack to a film that never was, Water And Tears is a real work of art by an artist enamoured by the endless possibilities of sound.” Louder Than War

“Often industrial in composition, these tracks are broken up and segmented by beautiful and caustic atmospherics and Serra’s penchant for discordant loveliness.” Beats Per Minute